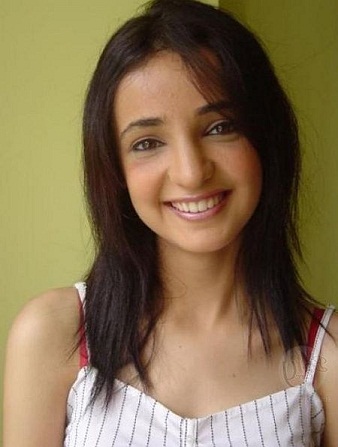 Sanaya Irani is an Indian television actress who started her career doing commercials and music videos. She was recognized after her first acting debut as Kajol’s friend Bobo in Yash Raj’s film Fanaa. She became popular after her show ‘Miley Jab Hum Tum’ aired on Star One. Her lead role as Khushi, on Star Plus’ most watched series’ Iss Pyaar ko Kya Naam Doon? ‘ It made her popular all over the world.

Photos of Sanaya Irani without makeup:

This is an off-screen image of Sanaya that we see below. She is without makeup and looks cute with her natural light skin tone. She wears a casual pink blouse and has a watch on her wrist. She has her nails painted and a dove sitting on her fingers makes her smile so beautifully and thus the picture has been clicked.

Elegance is the word:

Her hair is messy as they are wet and disheveled giving it a natural look. She appears to be wearing a long dress or casual sleeveless top. The angle the image was clicked at and her pose in this black and white photo make her look sleek and gorgeous even without makeup.

Sanaya Irani and Drashti Dhami are two familiar faces on Indian television today. They have been best friends since the beginning of their career and even now, when they are doing so well. They are both seen in a similar light blue top and are without makeup. Sanaya is wearing a pair of three-quarter jeans, which are also blue. He has a pair of black retro sunglasses in his hand.

We often say that best friends look alike, they look alike, they are always together. The same goes for Drashti and Sanaya. With all your bags packed, this image is clicked at an airport. They both have a similar hair band and hair accessories in green and pink. They both wear a black casual top, all ready for their trip.

This photograph was taken during the dance rehearsals of ‘Jhalak Dikhlaja’ where the best Sanaya has come to support the participant Drashti in an act. She is without makeup during rehearsals. She has a red hair band on her head, which she uses to push her hair back, and wears a light green dress along with a kneecap to protect her legs from injury during difficult dance moves.

This is a cute off-screen photo of Sanaya Irani with her brother. She looks pretty and, as usual, is in her casual style; a white print top with a pair of blue jeans. She has an elegant silver watch in her hand and, holding her brother by the neck, they pose sweetly.

This image was clicked while Sanaya Irani was shopping as we can see a lot of clothes in her hands. She looks simple and pretty without makeup, wearing a yellow and blue dress and wearing a grayish stole around her neck. Her hair has been cut in the back and the fringes in the front fall over her face from two sides. She has a part of her hair from the hair in the front and rests in the back, which makes her hairstyle look its best.

This image below has been clicked on the ‘Miley Jab HumTum’ series sets. Sanaya is with her co-stars here. She’s wearing a baby pink tank top. Her hair is parted in the middle and has been tied up like a ponytail. She is naturally beautiful with her sweet smile.